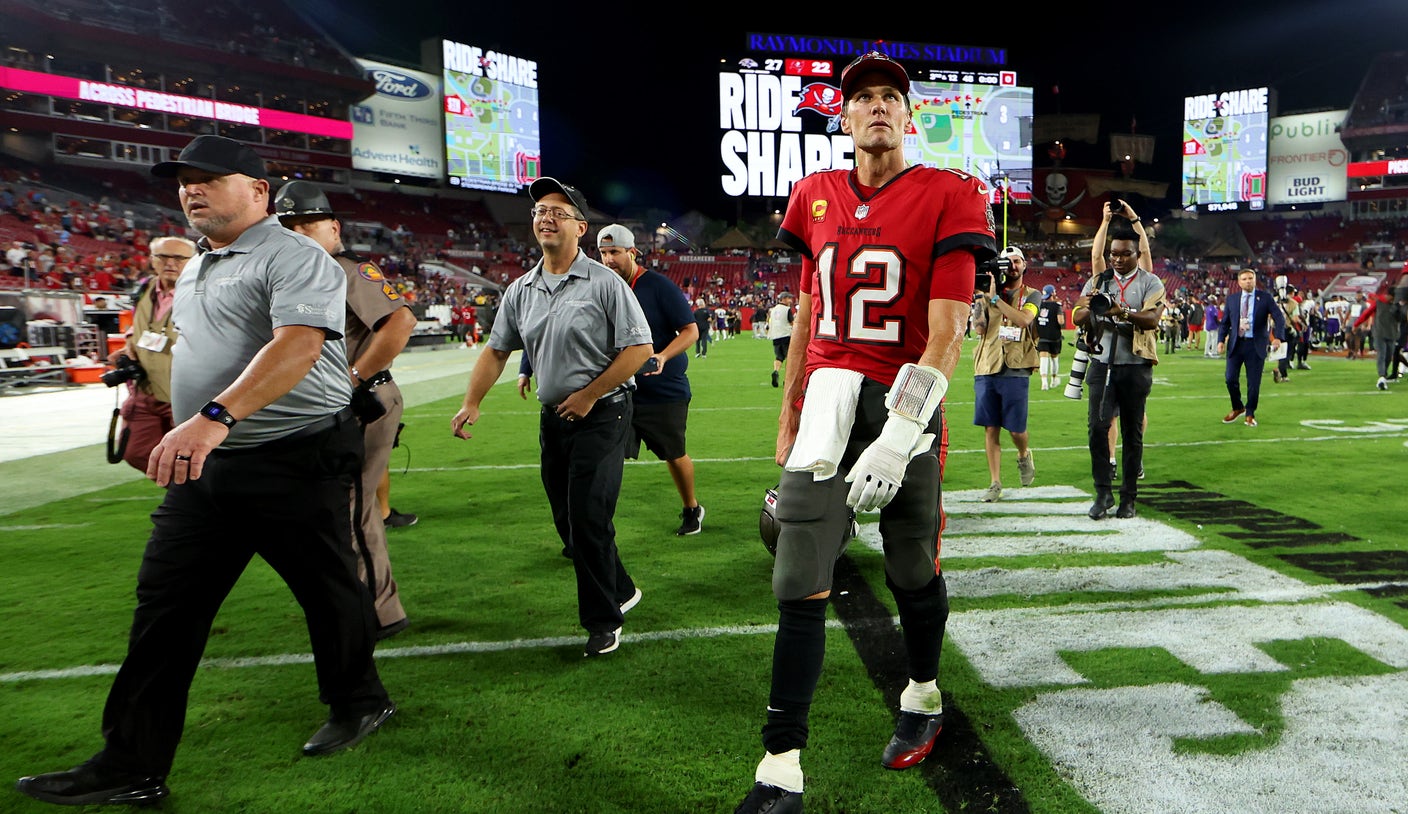 The Buccaneers are in stagnation.

Defeat away on Thursday night 27 to 22 Baltimore Ravens was another disappointing example of a team that can’t seem to get it all together — and eight games have already been played.

Nothing works offensively, which in turn affects the other side of the ball. By the time the fourth quarter began in Tampa, the defense had been on the field for 59 plays. Last possession time: Baltimore had the ball 38:23, Tampa Bay – 21:37.

Even Ryan Fitzpatrick, a former quarterback for the Bucks (and eight other NFL teams), had no answers in his postgame comments. The pirates themselves could not collect. This is the first time Tom Brady has lost three straight since 2002. For the first time in his career, he has been below .500 for eight weeks. And the end does not seem to be in sight. This is how the Bucs have looked all season, except for Week 1 vs Dallas Cowboys. Even their other two victories were not convincing.

So what exactly needs to be fixed?

The offense itself is painfully one-dimensional. The only time it didn’t was during the first few drives of the game, both of which ended in scores. And keep in mind that the first few scripts are usually written in advance. The opening drive for the Bucs offense was also balanced, containing four passes and five runs, including one yard from the running back Leonard Fournette.

Then the second drive, although they did make a field goal, stopped after five straight passes. Despite leading 10-3, the Bucs inexplicably gave up the streak almost entirely. They finished the night with just 44 yards rushing on 15 attempts.

Meanwhile, Brady caught 44 passes and completed 26 of them for 325 yards and a touchdown. Receivers Mike Evans and Chris Godwin caught just six of 11 targets apiece. Basically, Tampa does only one thing offensively – and not particularly well.

Perhaps the most interesting thing is how much the chemistry between Brady and his receivers has seemingly regressed. The aforementioned two are in their third year with Brady, so there’s absolutely no reason they shouldn’t be on the same page. Julio Jones, who got his first touchdown as a Buccaneer Thursday night, is a consummate professional no matter who he’s playing for, so it won’t take half a season for him to get into a scenario with Brady. It’s more obvious than ever how much the 23-year-old veteran misses his safety in Rob Gronkowski, who retired before the season. Brady didn’t even have tight end Cam Brate, Gronk’s replacement this season, due to injury.

In any case, the timing throws that Brady loves so much are missing. But why they are not there remains a mystery. Is Brady’s internal clock racing because he doesn’t trust his defense? Does he hold the ball too long? His shots off target? Are his receivers simply out of place?

Or did the defense figure them out because they didn’t have to worry about the Bucs running the ball?

Maybe it’s all of the above.

That’s what makes it all the more puzzling that the Bucs can’t or won’t run the ball. If the walkthrough isn’t working, turn it on. They’re dead last in offense this season, and it’s not because they don’t have enough defenders to do so. The team is called Rachad White in the third round to complement Fournette, who is projected to be one of the most complete defenders in the league.

Given the Bucs’ ineffectiveness even when they try to run, it’s almost a given that they go back to passing. That’s what this offense was built on, after all. But Tampa was just four of 13 on third down. They have the 26th lowest conversion rate in the league, which ranks third at just 36.11%.

And there is also a red zone.

Even when the Bucs do manage to move the ball down the field, they settle for a field goal more often than not. They convert just 47.37% of their red zone trips into touchdowns, which ranks 27th in the league. They rank 22nd in field goal situations, converting just 63.6% of those inside the 10-yard line into six points.

That could reflect on the offensive line and how much it struggles this season without a leader under center Ryan Jensen. Although Robert Hainsey filled it in wonderfully, the impact of losing a genius like Jensen cannot be overstated. The offensive line affects everything and provides one explanation for an offense that just doesn’t work in every aspect.

If it’s not the line of scrimmage, then maybe we need to rethink the fact that the first few attacks in a game are often scripted. This means that the team knows exactly what they are going to run regardless of what the opposing defense is doing. This is a period of opportunity to assess and adjust. You see what works and what doesn’t and then stick with the first one. Only we haven’t seen these adjustments in games.

The Ravens, on the other hand, did just that. They went out of their way in the first half, passing the ball 32 times and running it just seven times. But injuries to their top receivers at tight end Mark Andrews and wide receiver Rashod Bateman forced them back to earth in the second half. It might just be the best of them all. Baltimore outscored the home team 17-6 in the second half.

The Bucs now have a 10-day break before Los Angeles Rams to come to town. Perhaps this time will be enough to make serious adjustments.

“I think we’re going to try to figure things out,” Brady said after the game. “I think we’ll try to evaluate. We’ll have a little extra time to see what we’re doing and how we can do better moving forward.”

Carmen Vitali covers the NFC North for FOX Sports. Carmen previously appeared with The Draft Network and the Tampa Bay Buccaneers. She spent six seasons with the Bucs, including 2020, which added a Super Bowl title (and a boat parade appearance) to her resume. You can follow Carmen on Twitter at @CarmieV.