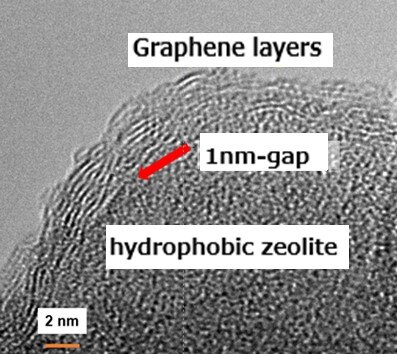 The effects of global warming are becoming more serious, and there is a great demand for technological advances to reduce carbon emissions. Hydrogen is the perfect clean energy that produces water when burned. To promote the use of hydrogen energy, it is important to develop safe, energy-saving technologies for the production and storage of hydrogen. Hydrogen is currently derived from natural gas, so it is unsuitable for decarbonization. Using a lot of energy to separate hydrogen will not qualify it as clean energy.

The graphene– the wrapped molecular sieving membrane prepared in this study has a partition coefficient of 245 and a penetration factor of 5.8 x 106 barriers that are more than 100 times better than conventional polymer separation membranes. If the size of the separation membrane is increased in the future, it is very likely that an energy-efficient separation process will be created to separate important gases such as carbon dioxide and oxygen, as well as hydrogen.

As seen in the transmission electron microscope image in Figure 1, graphene is wrapped around an MFI type zeolite crystal, being hydrophobic. The wrapper uses the principles of colloidal science to keep the planes of graphene and zeolite crystals close together due to reduced repulsion interactions. About five layers of graphene include zeolite crystals in this figure. Around the red arrow there is a narrow space of the interface where only hydrogen can penetrate. Graphene is also present on hydrophobic zeolite, so the structure of the zeolite crystal is impossible to see. Because of the strong force of attraction between graphene, zeolite-wrapped zeolite crystals are in close contact with each other by simple compression treatment and are gas-tight.

Figure 2 shows a model in which zeolite crystals wrapped in graphene are in contact with each other. The surface of the zeolite crystal has grooves derived from the structure, and there is a boundary channel between the zeolite and graphene through which hydrogen molecules can selectively penetrate. The model in which black circles are connected is graphene, and in some places there are nanowindows represented by blanks. Any gas can freely penetrate the nanowindows, but very narrow channels between the faces of graphene and zeolite crystals allow predominantly hydrogen to penetrate. This structure allows efficient separation of hydrogen and methane. On the other hand, the movement of hydrogen is fast because there are many voids between the zeolite particles wrapped in graphene. For this reason, high-speed penetration is possible while maintaining a high separation factor of 200 or more.

In addition, this separation principle is different from the conventional dissolution mechanism with polymers and the separation mechanism with pore size in zeolite separation membranes, and this depends on the purpose of the separation by choosing the surface structure of the zeolite or other crystal. Speed ​​separation for any target gas is in principle possible. For this reason, if the industrial production method of this separation membrane and separation membrane becomes scalable, the chemical industry, combustion industry and other industries can enjoy significantly improved energy consumption, leading to significant reductions in carbon emissions. The group is currently conducting research to establish a basic technology for the rapid production of large amounts of enriched oxygen from the air. The development of oxygen-enriched production technologies will revolutionize steel production and chemical industry and even medicine.

The study was published in Advances in science.

Accurate sieving of gases through atomic vapors in graphene

Collier County is picking up the pieces after Ian

Best way to estimate invasive plant removal costs? Get out and dig

South Africa’s biggest cities run out of water, but dams are...