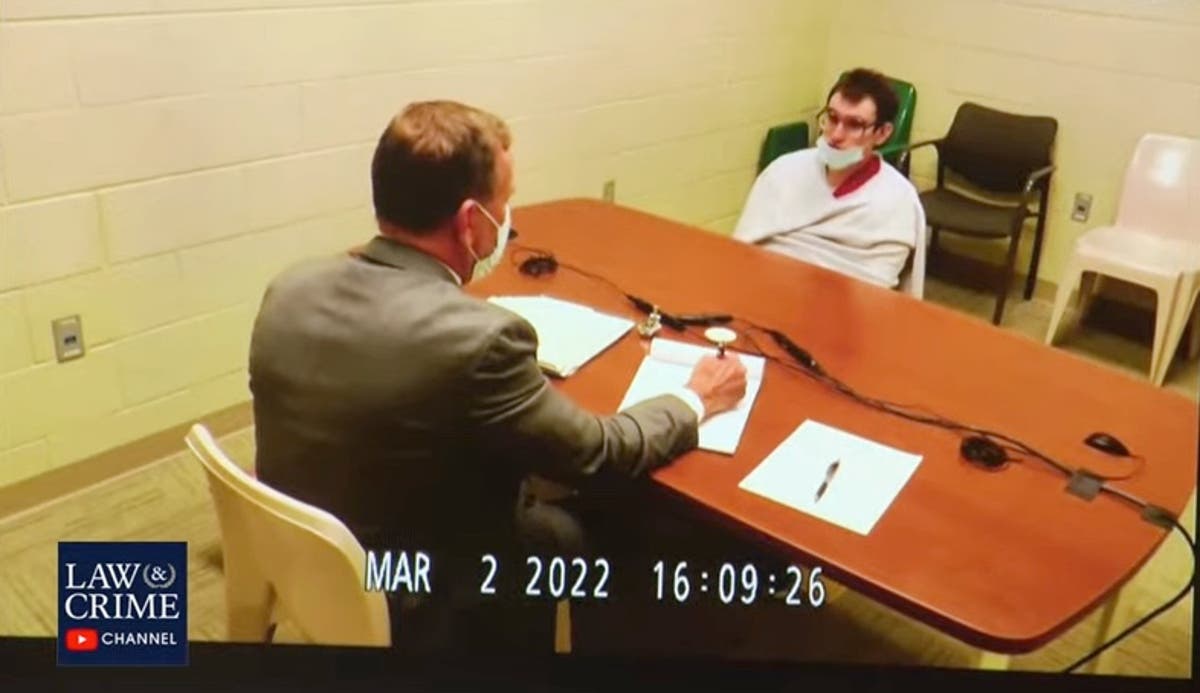 Nikolas Cruz revealed that the mass shooting at Marjory Stoneman Douglas High School ended only because he “couldn’t find anyone to kill” as he claimed he “showed mercy” to some of his victims.

The footage shows Cruz calmly recounting how he killed 17 high school students and staff, and detailed preparations for the 2018 Valentine’s Day attack.

Cruz claimed he “showed mercy” to his two victims – before killing them with an assault rifle because they gave him a “nasty look”.

“I think I showed mercy to those two girls,” the killer told Dr. Scott.

“I was going to leave, but they started showing their ugly faces.”

Cruz did not name the victims he was referring to, but he killed Kara Loughran, 14, and Meadow Pollack, 18, as they tried to huddle in an alcove outside a third-floor classroom door.

When asked how he showed mercy to them, Cruz stated that he did not intend to shoot them, but then decided to do so because of the “ugly look”.

“I thought about shooting them, but I didn’t want to do it, so I was going to leave down the corridor,” he said.

“But they gave me a nasty look,” he said, removing his Covid-19 mask to make a face as an example.

Cruz also claimed he thought they would try to stop him.

“I didn’t even aim or anything like that, I just shot,” he claimed.

Cruz also claimed that a “security guard” also “gave me a nasty look, so I shot him in the head,” referring to athletic director Chris Hickson, who died trying to save his students.

Although he claimed that so-called “nasty looks” drove him to kill some of his victims, this appeared to contradict other comments he made to an expert witness.

Cruz calmly described the graphic details of his murderous rampage, saying he saw one of his victims — apparently referring to freshman student Jaime Guttenberg — “crawling” on the third floor, so “I shot her in the back.”

When asked why he did it, Cruz told Dr. Scott, “I told you, I wanted to kill as many people as I could … so I shot her in the back, I shot her twice.”

The gunman said he believed Peter Wan was the last person he shot, giving a chilling description of the terrifying moment he shot the teenager in the head.

“His head blew up like a water balloon,” Cruz essentially told the psychiatrist.

Cruz then revealed what was the only reason he stopped the massacre when he did it.

“I couldn’t find anyone to kill,” was his anguished reply.

Cruz told Dr. Scott how he tried to shoot through the windows of the freshman building and break the glass to open fire on the crowds of terrified students who were evacuating the school.

But he failed to break through the glass.

As a result, he left his AR-15 and tactical vest on the ground on the third floor of the building and fled the school into the crowd.

Dr. Scott spent up to 500 hours on Cruz’s case, reviewing school and medical records and interviewing the gunman over three full days in March 2022.

A forensic psychiatrist testified that Cruz’s ability to recall the details of the massacre and his decision-making during the rampage indicated that he had adequate executive functions — the mental processes that allow people to plan and control his behavior when he wanted to.

Antisocial personality disorder is also known as sociopathy and is a mental disorder in which a person has a persistent lack of respect for right and wrong. Malingering is when a person fakes or exaggerates symptoms or tries to mislead the experts who evaluate them.

His testimony comes as the prosecution seeks to show that Cruz is a sociopath who planned his attack and has no remorse for killing the 17 victims – an argument that undermines Cruz’s defense that fetal alcohol use disorder (FASD) caused him to commit Valentine’s Day Massacre.

As part of his diagnosis, Dr. Scott explained that Cruz exhibited both impulsive aggression and planned aggression — when a person plans and researches the aggression they want to carry out.

To support his diagnosis, jurors were shown other videotapes of Dr. Scott’s interview with Cruz, in which the gunman described in detail the plans and preparations that went into carrying out one of the worst mass shootings in US history.

In one clip, Cruise is seen telling Dr. Scott about his preparations the night before the massacre, including practicing shooting in the backyard.

Cruz also said he had planned ahead of time to wear his Marjory Stoneman Douglas High School JRTOC polo shirt for the attack “to disguise himself so as not to attract attention” and something to carry the firearm in so as not to arouse suspicion on the way to school .

The 24-year-old also told Dr. Scott that he first thought about mass shootings when he was 13 or 14 years old.

He said the thoughts “come and go” – they “pop into my head and just disappear the next moment”.

Cruz said he became interested in mass shootings by reading books, watching violent videos such as war videos and a documentary about the Columbine massacre.

In another clip, Cruise detailed his “research” on several other mass shootings, including Columbine and Virgina Tech, in preparation for his own.

“I did my own research. I looked at Wikipedia, I studied mass murderers and how they did it,” he said nonchalantly.

From his research, he said he learned what weapons the killers used in those cases, as well as other things you might expect during a massacre.

“They kept their distance from people and drove as fast as possible, and the police did nothing,” he said.

He added that he learned that “if I did it on a school campus, the police wouldn’t do anything” and that he would have a “small window” of time – “maybe 20 minutes.”

Jurors were also shown Cruz’s social media history in the months leading up to the attack, where he talked about his plans.

On September 24, 2017 – five months before the massacre and the death of his adoptive mother – he wrote on YouTube: “I’m going to be a professional school shooter.”

A few days later he wrote: “My life sucks, I failed high school. I’m going to go for the kill.’

Dr. Scott testified that Cruz’s YouTube comments are “a window into what he thinks and feels,” revealing that he has “thought for a long time about killing people and school shooters.”

A few days before the mass shootings, Cruz also created a video where he told viewers about his plans for the shooting.

“My goal is 20 people, my location is Stoneman Douglas in Parkland, Florida. It will be a big event,” he says.

“If you see me on the news, you’ll all know who I am,” Cruz says, breaking into a smile and a laugh.

“You’re all going to die,” he says before making a camera sound.

Social media posts, videos before the attack and Cruz’s own statements show the level of planning behind the massacre, the expert said.

“It was not a sudden decision. It’s been months in the planning,” said Dr. Scott.

The psychiatrist began testifying for the first time last Tuesday as part of the prosecution’s rebuttal case before the trial was suspended due to Hurricane Yang.

A jury will decide whether to sentence Cruz to life in prison or the death penalty.

Draymond Green fined, not suspended; set to rejoin the Warriors on Thursday

US offers help to Cubans amid hurricane conditions amid power outages