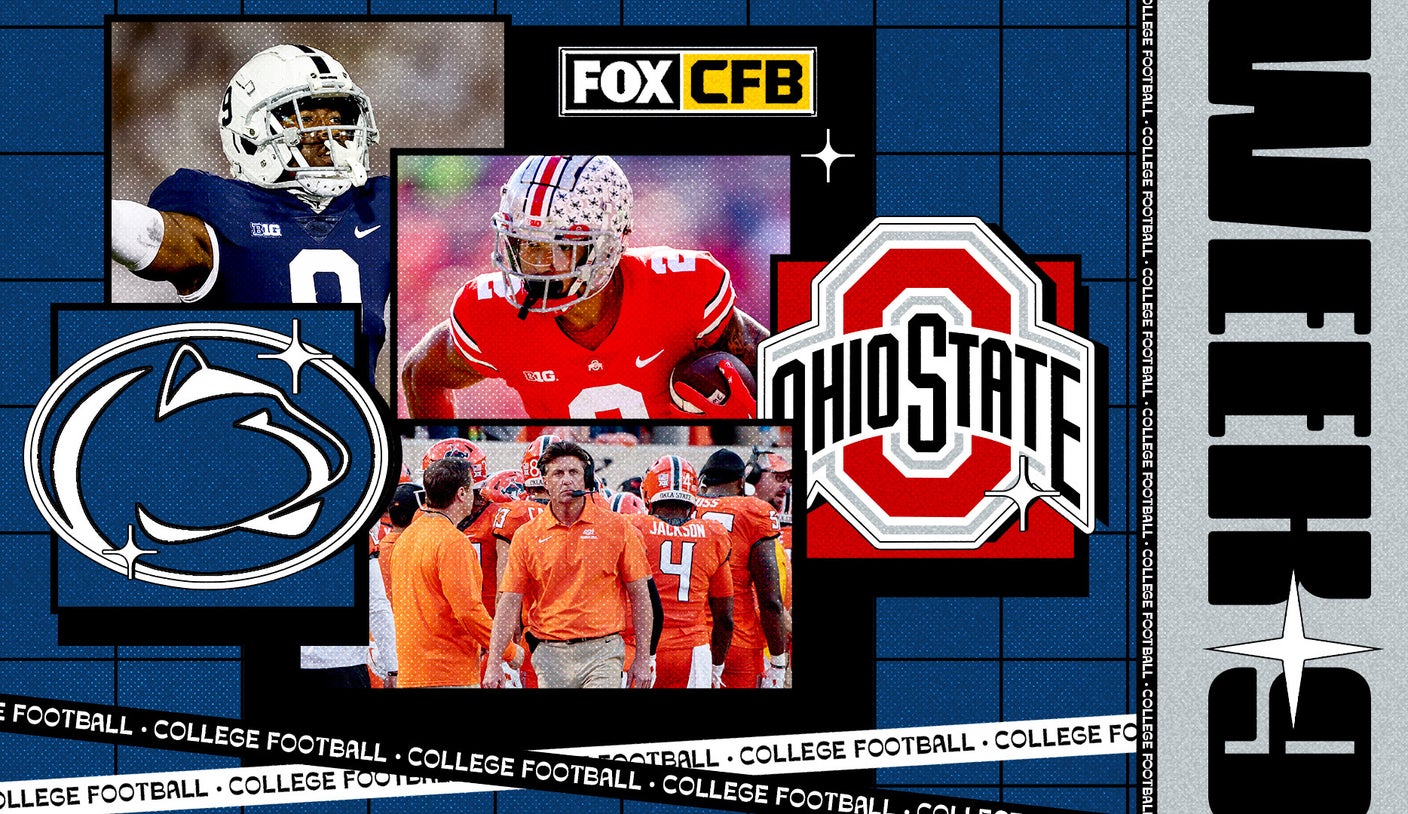 The knock on No. 2 Ohio State is that the Buckeyes have had a soft schedule so far this season. That changes this weekend.

James Franklin’s No. 13 Penn State Nittany Lions will welcome Ryan Day’s Buckeyes to Happy Valley in a key Big Ten matchup on Saturday. The game kicks off Week 9 of the college football weekend as the featured game on “Big Noon Kickoff” on FOX.

Among the other key games on the Saturday slate is a Big 12 showdown between No. 9 Oklahoma State and No. 22 Kansas State.

Here’s what we’re looking forward to watching in some of the biggest matchups this weekend.

What are you watching in No. 2 Ohio State at No. 13 Penn State (Noon ET; FOX and the FOX Sports app)?

Young: This is an opportunity for the Buckeyes to put away the emerging narrative that they haven’t played anybody all season, with their first top-25 matchup and on the road against the Nittany Lions.

Since 2012, Penn State has beaten Ohio State as many times as Michigan has — once — and never in the Ryan Day era.

If the Buckeyes maintain their current form, there’s no reason to believe they can’t win the Big Ten crown or even — gasp — their first national title since 2014. Interestingly, this 2022 Ohio State team looks a lot like 2018 Clemson.

If the rankings hold, Ohio State will play two ranked opponents in the regular season: Penn State and Michigan. Clemson has shown all OSU has to do is win.

Cohen: Given the incredible depth in Ohio State’s receiving corps, a natural topic of conversation each week is how the opponent’s cornerbacks will defend the likes of Emeka Egbuka (41 catches, 735 yards, 7 TDs), Marvin Harrison Jr. (38 catches, 598 yards, 10 TD) and Julian Fleming (17 catches, 327 yards, 6 TDs). Any additional production they get from No. 1 wideout Jaxon Smith-Njigba, who is still recovering from a hamstring injury, feels like a bonus given the cornucopia of talent around him.

RJ Young is joined by Geoff Schwartz to preview the biggest matchups in Week 9, including the “Big Noon” matchup between Penn State and Ohio State.

Cohen: This game is all about the big picture. Two weeks ago, Oklahoma State fell short against TCU in a battle of undefeated Big 12 teams. Then the Cowboys responded with a come-from-behind win over Texas to keep their narrow hopes of a College Football Playoff berth afloat. Based on the current rankings, this week’s date with Kansas State represents the last chance for head coach Mike Gundy’s team to impress the committee by knocking off a ranked opponent. Oklahoma State will need help to reach the playoff, but the Cowboys aren’t dead just yet.

The same 30,000-foot view is instructive when forecasting Kansas State’s future, albeit for a very different reason. The Wildcats lost their top two quarterbacks to injury in a 10-point loss to TCU last weekend, which thrust freshman Jake Rubley into action. The lack of clarity surrounding who starts against Oklahoma State is one thing, but the long-term health of starter Adrian Martinez and backup Will Howard carry significant implications for the trajectory of Kansas State’s season as a whole.

Young: With Texas Christian left as the last undefeated team in the Big 12, this is an opportunity for Oklahoma State to firmly place itself into the second spot for the Big 12 title game.

K-State hasn’t revealed who will start at quarterback on Saturday after both Martinez and Howard left the game against TCU with injuries.

That leaves the door open for the OSU defense to star in this game and put together a dominating performance just days before the CFP selection committee reveals its initial rankings on Tuesday.

Oklahoma State is on the rise

RJ Young shares his Week 9 Top 25, including thoughts on Oklahoma State after a win over Texas.

Young: Nobody needs style points if they’re gonna make the CFP more than the Ducks do. After losing their season-opener to Georgia by 46 points — or four more than the Ducks have averaged in Pac-12 play — it behooves UO to decisively put away Justin Wilcox’s Golden Bears by three TDs as they continue their march toward a possible place in the Pac-12 title game.

Cohen: The theme of winning with style is definitely critical for Oregon as head coach Dan Lanning’s team tries to distance itself from the 49-3 pummeling it suffered at the hands of Georgia to begin the season. Can they win that way against Cal? The numbers suggest it’s possible. Cal ranks 83rd in total defense at 392.1 yards per game and gave up 476 yards in a loss to Washington’s high-powered offense last week. Huskies’ quarterback Michael Penix Jr. threw for 376 yards and two scores, and seven of his receiving targets caught a pass of 15 yards or more. The Bears are tied for 84th in sacks with 13, only four of which have come in the last three games. That means Oregon QB Bo Nix should have plenty of time to sling it.

Cohen: This is another intriguing offense-versus-defense matchup. There’s no doubting Tennessee’s firepower this season with the best scoring offense in the country and more gains of 40-plus yards than anyone in FBS, with 21. The next-closest Power 5 team is Ohio State with 14 gains of 40-plus yards. Quarterback Hendon Hooker (137-of-194 for 2,093 yards, 18 TDs and one INT) is in the thick of the Heisman Trophy race alongside Ohio State quarterback C.J. Stroud.

But there’s plenty to be said for Kentucky’s defense under head coach Mark Stoops, whose last two stops before arriving in Lexington were stints as the defensive coordinator at Arizona (2004-09) and Florida State (2010-12). The Wildcats are 10th in total defense among Power 5 schools and have limited several explosive offenses well below their averages. This includes holding Ole Miss (490.3 yards per game) to 399 yards in a three-point loss, allowing just 279 yards to Florida (430.1 yards per game) and keeping Mississippi State in check with 225 yards last week (410.8 yards per game).

Young: The Vols are the only team averaging more points per game (50.1) and yardage per game (571) than the Buckeyes. What’s more? UT doesn’t need the ball for long to get to 40 or 50 points — no matter who it plays.

Last season, they needed just 14 minutes of possession to put up 45 on Kentucky in Lexington. But this season the Vols are playing with an expectation to make the SEC title game for the first time since 2007.

Let’s see if Smokey and the Vols can go hunt.

RJ Young and Geoff Schwartz share their thoughts about the upcoming game between Kentucky Wildcats and Tennessee Volunteers.

Alex Grinch’s defense will also have to handle one of the most talented pass-catchers in the sport for a consecutive week. In their loss to Utah, tight end Dalton Kincaid racked up 16 catches for 234 yards — while allowing more than 500 yards of offense.

Arizona wideout Jacob Cowing is a bona fide Biletnikoff Award candidate with 53 catches for 737 yards. He’s caught at least six passes in every game the Wildcats have played, and will likely play a big role if the Wildcats are to pull off their first top-10 upset since defeating No. 10 USC in 2012.

But while the chances of an upset are slim — as of Wednesday morning the Trojans were favored by 15.5 points — Fisch has the kind of wide-ranging experience to design an offensive game plan that might trouble a USC group outside the top 70 in total defense. Fisch’s resume includes stops with the Houston Texans (2002-03), Baltimore Ravens (2004-07), Denver Broncos (2008), Seattle Seahawks (2010), Jacksonville Jaguars (2013-14), the Los Angeles Rams (2018-19) and the New England Patriots (2020). He sprinkled college jobs in between and has Minnesota, Miami, Michigan and UCLA on his CV. The football knowledge is there for Fisch to compete with the Trojans even if the roster falls short.

Why the Wolverines are for real

Young: Will the streak hold?

Is this a get-right game for 3-4 MSU? If it is, Spartan quarterback Payton Thorne and wide receiver Keon Coleman will have to form a duo more dynamic than peanut butter and jelly because the Michigan firm of Blake Corum and Donovan Edwards has vengeance on its mind.

Cohen: At the beginning of last season, the Michigan football to-do list included beating Ohio State for the first time since 2011, winning the Big Ten title for the first time since 2004 and reaching the College Football Playoff for the first time period. Outside of Schembechler Hall, reporters wondered just how close head coach Jim Harbaugh had come to being fired after an 11-8 record the two previous seasons and four consecutive bowl losses. Such lofty goals seemed like wishful thinking for a team that wasn’t even part of preseason top-25 polls.

Yet Harbaugh’s team defied the odds and bewildered the masses by surging toward the top of college football while achieving all three goals. The only thing the Wolverines didn’t do last season — aside from winning the national title — was beat their in-state rivals Michigan State. Last October’s 37-33 loss in East Lansing, at which point both teams were undefeated, left an open wound that still hasn’t healed. This is a revenge game for Michigan, and the Wolverines have the firepower to win big.

Michael Cohen covers college football and basketball for FOX Sports with an emphasis on the Big Ten. Follow him on Twitter at @Michael_Cohen13.

RJ Young is a national college football writer and analyst for FOX Sports and the host of the podcast “The Number One College Football Show.” Follow him on Twitter at @RJ_Young and subscribe to “The RJ Young Show” on YouTube.

Get more from College Football Follow your favorites to get information about games, news and more

The Indy 500 gives the usual emotion, and the first winner at Ericsson