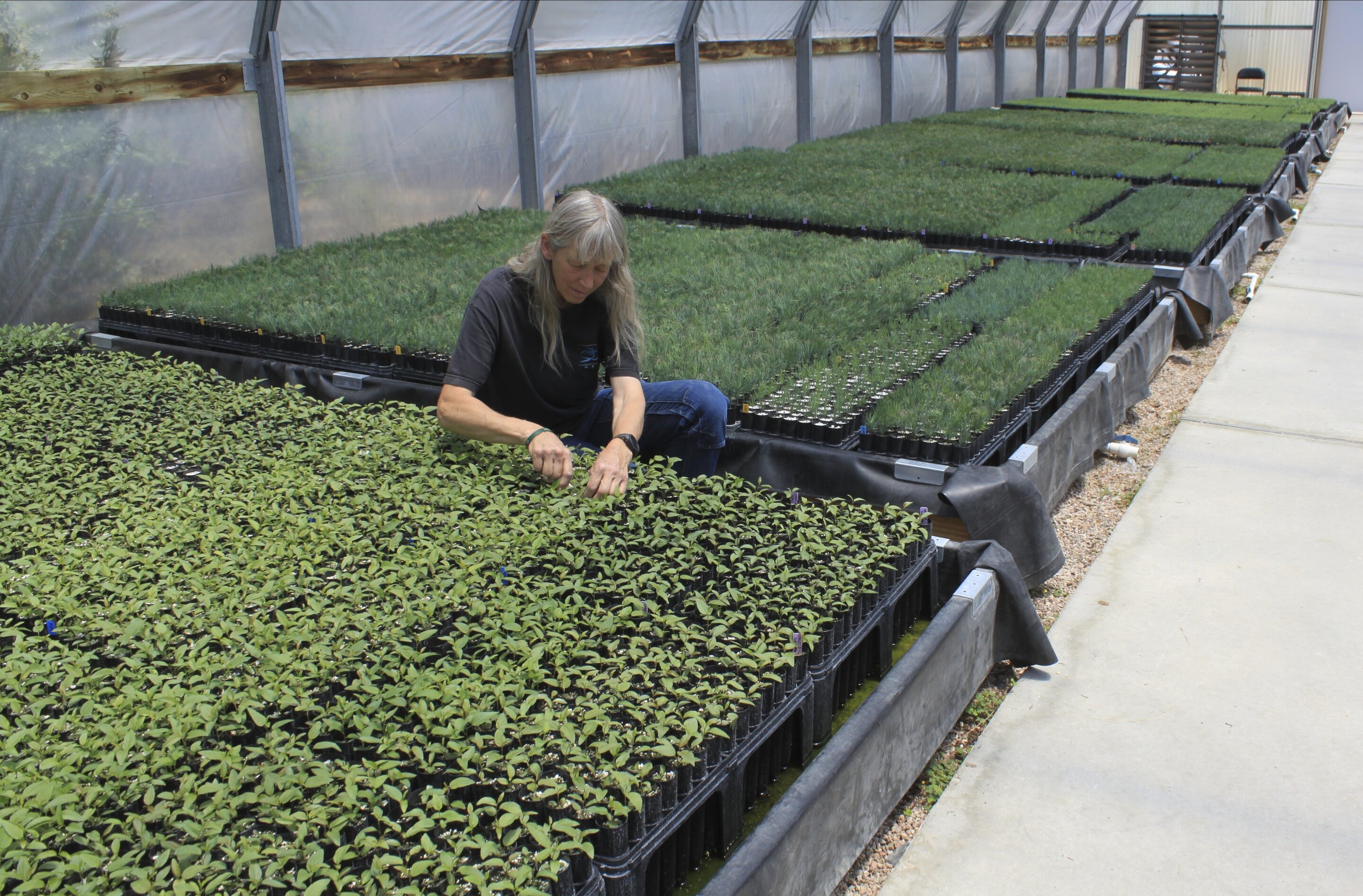 A New Mexico facility where researchers work to restore forests devastated by fires faced an almost cruelly ironic threat: The largest wildfire burning in the U.S. was fast approaching.

Owen Burney and his team knew they had to save what they could. Atop their list was a priceless bank of millions of ponderosa pine, spruce and other conifer seeds meant to help restore fire-ravaged landscapes across the American West.

Next were tens of thousands of tree sprouts, many of which were sown to make them more drought tolerant, that were loaded onto trailers and trucked to a greenhouse about 100 miles (161 kilometers) away.

New Mexico State University’s Forestry Research Center in the mountain community of Mora is one of only a few such nurseries in the country and stands at the forefront of a major undertaking to rebuild more resilient forests as wildfires burn hotter, faster and more often.

Firefighters have managed to keep the flames from reaching the center’s greenhouses and there’s a chance some of the seedlings left behind could be salvaged. But Burney, superintendent of the center, said the massive fire still churning through New Mexico highlights how far behind land managers are when it comes to preventing such fires through thinning and planned burns.

“The sad truth is we’re not going to be able to do that overnight, so we’re going to see these catastrophic fires for a decade, two decades, three decades—it depends on how quickly we make this turn,” he said, while stuck at home watching live updates of the fire’s progression as road blocks remained in place.

This year is the worst start to the wildfire season in the past decade. More than 3,737 square miles (9,679 square kilometers) have burned across the U.S., almost triple the 10-year average.

With no shortage of burn scars around the West, researchers and private groups such as The Nature Conservancy have been tapping New Mexico State University’s center for seedlings to learn how best to restore forests after the flames are extinguished.

The center has provided sprouts for projects in New Mexico, Arizona, Colorado, Utah, Texas and California, but experts said its capacity for turning out as many as 300,000 seedlings annually isn’t enough now and certainly won’t be in the future as climate change and drought persist.

The newly formed New Mexico Reforestation Center, made up of a number of universities and the state’s Forestry Division, submitted a nearly $80 million proposal to the federal government just last month to jump start a reforestation pipeline that encompasses everything from seed collection to how seedlings are sown in nurseries and where they’re ultimately planted.

Matt Hurteau, a biology professor at the University of New Mexico, and his team have been building models to better predict the sweet spot where seedlings will have the best chance of survival as researchers and land managers try to reestablish pockets of forest around the West.

About 10,000 seedlings rescued from the forestry center in Mora will be used for a project focused on growing ponderosa pine at higher elevations. The trouble, Hurteau said, is that past fire footprints chosen for the research are in the line of fire again this year.

He also noted that modeling done last year on the upper Rio Grande watershed that spans Colorado and New Mexico suggested higher elevation forests would see the biggest impacts from wildfire and climate change through the end of the century.

“Here we have the Calf Canyon (Hermits Peak Fire) and it’s ripping through those high elevation forests like it’s no problem at all,” he said of the fire currently burning. “I think we’re consistently seeing actual conditions happening sooner than our models would suggest.”

Many areas are going to need some attention, said Anne Bradley, the forest program director for The Nature Conservancy in New Mexico. The group has worked with Santa Clara Pueblo to collect seeds and plant thousands of tiny trees sown at the research center over the last few years in hopes of boosting the emerging science of reforestation.

But at this pace, she acknowledges the work will take centuries. Part of the goal, she said, is to find ways to do it cost-effectively.

Researchers also are looking at how the forest naturally regenerates after fire. Experts say mimicking nature by focusing on tree islands rather than dense swaths of timber could act as a hedge against the next wave of wildfires.

“The genetics really matter; it matters how you raise them in the nursery; it matters where you put that hole in the ground, how you harden those trees as seedlings,” Bradley said. “Everything we do is an attempt to learn more and to see what our options might be.”

Similar work is happening in Colorado, with thousands of seedlings from the center in Mora earmarked for reforestation projects there.

Larissa Yocom, an assistant professor at Utah State University’s Wildland Resources Department, has plans for thousands of aspen seedlings that were rescued from the center. She and her team have worked in the footprint of a 2020 wildfire in southwest Utah. She’s holding out hope that the large New Mexico fire won’t dash plans for the latest experiment in an older burn scar just north of the fire line.

If the West wants to keep its forests, policymakers need to think about it in economic terms that would have significant benefits for water supplies, recreation and the rural and tribal communities that hold these mountain landscapes sacred, said Collin Haffey, forest and watershed health coordinator with the New Mexico Forestry Division.

Haffey said he can see, feel and smell the dryness that’s overtaking the mountains.

He has been part of big project to replant areas of the Jemez Mountains in northern New Mexico, where several large blazes have burned over the last two decades, taking hundreds of homes with them. The latest fire still is creeping through some of the old burn scars.

“That’s part of why the reforestation component is important to me because it does allow us—us being our communities—to find ways to start the healing and the recovery process,” he said. “It will take generations after these fires. But planting trees is one small thing we can do to potentially have a large impact further down the road.”

© 2022 The Associated Press. All rights reserved. This material may not be published, broadcast, rewritten or redistributed without permission.

This document is subject to copyright. Apart from any fair dealing for the purpose of private study or research, no
part may be reproduced without the written permission. The content is provided for information purposes only.

As the Golden State Warriors climbed the mountain again

Shape-shifting microrobots can brush and floss