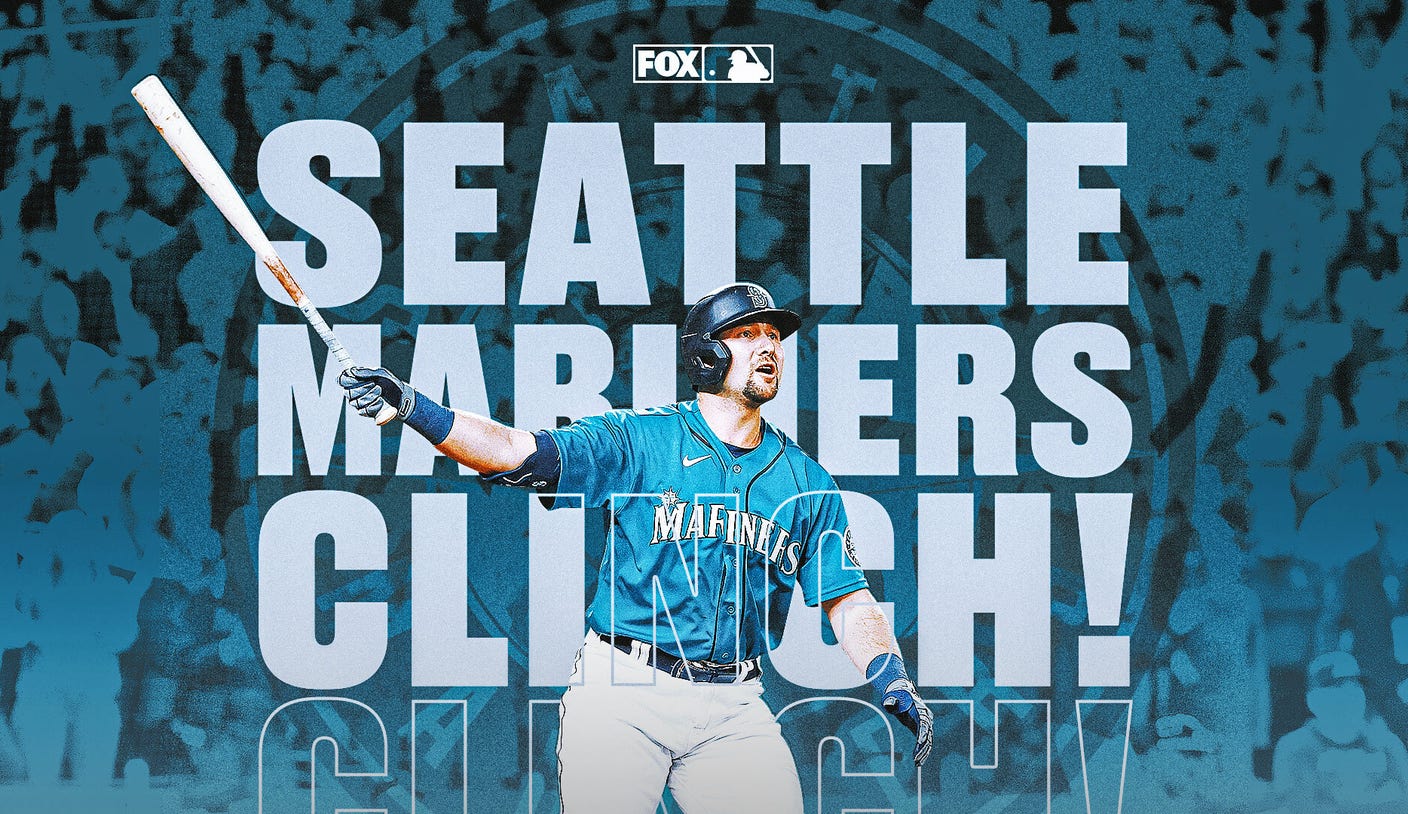 If the ball is out of the pit Sailors the catcher Cal Raleigh banging on the windows of the Hit It Here Cafe in right field, I did what I’m sure the other 44,000+ Mariners fans in the stadium and thousands of others across the country did.

I gasped. I screamed. I looked around in disbelief. I watched in complete shock and awe as the entire Mariners squad and coaching staff did their usual post-victory dance to celebrate.

As the festivities on the field gradually died down, I began to process what I had just witnessed: my favorite team pinch-hitting and hitting a home run to end a 21-year postseason drought. And I was there!

Even the day before, I could not have dreamed that such a thing was possible. In late August, with the Mariners’ postseason appearance looking increasingly likely, I called and booked flights to Seattle, hoping to catch a glimpse of the postseason clinch. This hope required exquisite consistency and timing, but I was content knowing that I would be happy to root for my favorite team in their home park regardless of the context.

So when I arrived in Seattle on Thursday, I was excited that I was almost guaranteed to see the clinch in one form or another. But even as the M’s playoff chances soared to 99% over the past month, it was hard to imagine how they would feel if they secured a postseason spot — let alone how it would end up happening.

Ironically, the man with perhaps the most potential impact was standing on the mound 2,400 miles away. With a magic score of one, the Mariners could clinch a postseason berth with either a win or not Orioles loss, and the Orioles were in the Bronx, taking over Yankees in a game that started nearly three hours before the Mariners took the field against Oakland.

The Orioles’ veteran right-hander Jordan Lyles was instructed to preserve Aaron Judge in the yard and the Orioles’ very faint postseason hopes are alive and he pitched seven strong innings in a 2-1 victory. And so instead of finding out the postseason drought was over by looking at their phones in the second inning Friday, the crowd at T-Mobile Park got a chance to see the Mariners clinch in a much more appropriate way: with a win.

If Ty France hit an RBI double in the bottom of the first, the evening ahead began to crystallize – or so I thought. I assumed the offense would revolve around the rookie A’s lefty Ken Valdichuk, and we would count down to the clinch. Instead, the A’s tied the score in the top of the second, and both offenses went quiet after that.

Nothing came from either side for the next six innings. Valdichuk got a job. Sailors starter Logan Gilbert it was great. Suddenly it was the ninth inning, still tied 1-1. If a beginner discharger Matt Brash deleted Jordan Diaz with a knotty slider to end the top of the ninth, the crowd roared — and reality began to set in: The Mariners could end their shutout drought.

Queen’s “We Will Rock You” blared as the stadium prepared for mayhem. A tie going into the bottom of the ninth is almost always exciting, but this was taken to the extreme. A possible storybook ending arrived on a silver platter. One run to end the drought. That’s all it takes.

At that moment, looking out over the packed crowd was like some kind of fever dream. It also felt like the game should end with a homer. And that was reflected in the aggressive hacks of Haniger and Santana, who came down swinging against the A’s strong pitching. Domingo Acevedo.

When Reilly stepped to the plate as a pinch hitter, it was clear he had the same goal: to end this one in one fell swoop. And can you blame him? In these scenarios, no one fantasizes about poking the ball the other way to get a base hit. It’s always about hitting a dinger!

Well, seven innings later, on a 3-2 slider just below the zone, Raleigh launched a long ball for the ages. The drought is over.

The entire fan base could finally breathe a sigh of relief — well, after they (we) were done screaming, of course.

The truth is, I don’t even know the half of it. You see, I’ve been a Mariners fan for a little over a decade. Growing up outside of Washington, D.C., there was no local team that I could get attached to at an early age. The Citizens arrived when I was 10, but their early struggles failed to make baseball a big priority for me. Bryce HarperComing in helped spark my love for the sport, but it wasn’t enough to make me a fan of the team as a whole.

Instead, I became enamored with an infectious electric pitcher on the other side of the country named Felix Hernandez, who recently won his first Cy Young Award. I enjoyed staying up late to watch the West Coast games and tried to never miss a Felix start. Ultimately, I found myself attracted to the Mariners more broadly, despite the severe lack of talent around Felix.

Then, on August 15, 2012, King Felix quit 23rd perfect game in MLB history. That almost settled it: I was a Mariners fan, for better or for worse.

Aside from Felix, however, the Mariners fan community on the Internet, which I’ve gradually entered, seemed to have made a habit of celebrating much of the roster regardless of the team’s record. Seattle’s geographic isolation from the rest of the baseball (and sports) landscape seemed to heighten the community’s protectiveness and appreciation for its players. Even though I was thousands of miles away and had never been to this city in my life, I was fascinated.

Fast forward ten years, and last weekend I got to experience the city showing its ballroom love in the most exciting context imaginable: finally on the cusp of a postseason berth. I was lucky to sit in the royal court the beginning of felix in 2015but I haven’t been back to the Pacific Northwest since.

In addition to the excitement of the playoff push, I was there for Fan Weekend. While much of the programming during the games focused on honoring the fans on the field, it seemed that the fans also wanted to show their appreciation to those on the field as much as possible.

It helps that the Mariners 2022 seem to have something for all fans to root for. There is Julio Rodriguez, the new face of the franchise, who has his own cheering section in center field (The J-Rod Squad) like Felix once did down the left field line. You have Marco Gonzalez, J. P. Crawford and Mitch Hanigerfamiliar faces who have borne the brunt of the drought the longest.

Robbie Ray and Luis Castillo are high-profile pitchers who have bolstered the rotation in a big way. Here it is highly efficient bullpen filled with prolific flamethrowers and con artists. Let’s not forget Carlos Santana and Eugenio Suarezveterans who came up with the incredible clutch over and over again all summer.

Dylan Moore and Sam Haggerty are the quintessential utility man and basepath chaos agent. There is Jared Kelenich, a very talented prospect who wrestled very hard but also started to figure things out just when the team needed him the most. Even Brian O’Keefe, a 29-year-old catcher who was called up to make his MLB debut when Kurt Casali made the list of parents — received a standing ovation for his first career hit on Saturday:

And let’s not forget the lanky right-hander with an alter ego named Walter and a beefy catcher affectionately known as the Big Dumper, which forever changed Mariners history. From my place in the stands, it was clear how much each member of the team means to the city. The Seattleites didn’t just want to get back to the playoffs for themselves; they also wanted it for their players who had worked so hard to achieve what 20 teams before them had failed to do.

I always say to people who (rightly) assume that Ken Griffey Jr. and Ichiro sparked my M’s fandom: Of course I love those guys—how could I not? — but they were not the ones who drew me to them. King Felix won me over, and then many others who followed him supported me, from major franchises like Hisashi Iwakuma, Kyle Seager and Nelson Cruz to less heralded but still likable guys like Franklin Gutierrez and Mike Zunino. It saddens me that these players never reached this special moment, but their contribution to my fandom and team cannot be underestimated.

Throughout this weekend, I kept thinking about the lifelong fans who have a strong emotional attachment to people like Ichiro, Griffey, Edgar Martinez, Jay Boehner, Alvin Davis, famed broadcaster Dave Niehaus, and many other greats of yesteryear, from miserable low 80’s to a 116 win team in 2001. Certainly, over the past decade, I’ve dedicated thousands of hours of my life to staying up late to watch a team on the other side of the country fail repeatedly, and it was amazing to see that dedication pay off on Friday night.

But I also know that what I’m feeling pales in comparison to the emotions of those who have lived through a complete drought and whose connections to the team and its history stretch back decades. And for those people, many of whom I was lucky enough to meet and spend time with during my four days in and around T-Mobile Park, I couldn’t be happier.

That long, difficult chapter of Mariners baseball is over. With one swing, Raleigh closed the book decisively and finally banished the word “drought” from the fan vernacular.

But beyond the relief at that moment, there is serious reason to be excited about what will happen next. Because unlike the handful of teams over the last decade (2014, 2016, 2018, 2021) that sniffed the postseason but fell short with lopsided and completely inconsistent rosters, this is a group with a great foundation for future success.

No matter what happens this postseason, the Mariners are here to stay. The roster will likely change this winter — Jerry Dipoto is the general manager, after all — but there’s a strong core, and a postseason push should be an expectation, not a pipe dream.

“When Jerry and I came here seven years ago, we had a goal,” manager Scott Cerve said during his speech to the crowd after the game. “We needed to end the damn drought.”

He then continued, “Yes, we ended the drought. But this team is just getting started.”

Jordan Shusterman is half @Cespede’s BBQ and baseball writer for FOX Sports. Follow him on Twitter @j_shusterman_.

Hurricane Ian left a devastating trail, but the damage continues.

The rescuer allegedly steals from the 84-year-old client a home, saving lives

Broadcast of launch of a rocket from the Moon online

Pac-12 storylines: Is Utah a CFP contender? How will Lincoln...